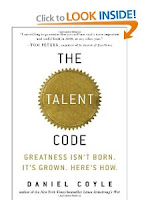 Ignition—The #2 BIG THING: Deep practice isn’t easy and requires a spark to start it and fuel to keep it going. Coyle calls this stimulus “ignition.” He likens it to “emotional rocket fuel.” Sometimes it’s personal; something happens in life—a momentous occasion, like you meet the president and decide to become a politician. Or in South Korea, when Se Ri Pack won a big LPGA tournament, a whole nation’s future women golfers got ignited. Time and again, there will be a breakout of success and then a contagious fire that takes place and ignites.
a.    Tiny Idea: When kids were asked about playing a musical instrument—how long they thought they would play their instrument—their responses determined a lot. Long-term-commitment kids with a low level of practice (20 minutes a week) progressed faster than kids with a short-term attitude but who practiced much more (about 1 hour a week).
b.    The Trigger: Primal, unconscious clues are big motivators. Things like the unspoken message—“I want to belong to that group”—will force us to practice or imitate others to become part of a group. Another primal clue, “I’m not safe,” will trigger people to work hard to protect themselves. It’s tripping the hair trigger of the reptilian brain that ignites the energy to get practice—deep practice—moving. The author notes a study of famous men and women who lost a parent early in life as contributing proof of how insecurity can trigger action and deep practice.
Posted by Steve Gladis at 9:06:00 PM

Thanks for the post. This is very useful information. http://www.getcliqup.com