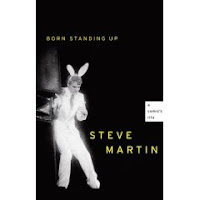 A Guide for Leaders:

Easy to be great…hard to be good

“The consistent work enhanced my act. I learned a lesson: It was easy to be great. Every entertainer has a night when everything is clicking. These nights are accidental and statistical…. What was hard was to be good, consistently good, night after night, no matter what the abominable circumstances.”

Martin writes clearly. It’s not great, but very good stuff. What’s so good is that it’s authentic. You get a sense that he peeled back the cover of fame to show you the working parts. Not always pretty, mostly a tragicomedy, Martin reveals the genesis of a comic icon, who has won an Emmy, three Grammys and was a recent (2007) Kennedy Center Honoree.

There’s a now famous joke about a tourist in who asks a cab driver, “How do you get to Carnegie Hall?” The cab driver answers, “Practice, practice, practice.” Born Standing Up, I felt like Martin had been the tourist who not only asked that very question but also took the cab driver’s advice. Steve Martin was not an overnight wonder. He toiled long and hard in the vineyards of Disney World, Notts Berry Farm, nightclubs, small towns, show after show after show, night after night. It took him years of endless practice to climb the comedy ladder, to get recognized and then to be a star—which ultimately and ironically isolated him.

And while at times the book felt like his personal therapeutic memoir written at the direction of his psychologist to place his life in some sort of a meaningful order, it worked for me as a reality check. We all tend to look at success and consider that it appeared magically, as if the entertainer had won the fame lottery. However, reality is doing shows four and five times a day for years, often to crowds small enough to fit into a kids blow-up swimming pool. Night after night, great is easy….good is damned hard.

His life lesson rings true for everyone, especially leaders, the kind of people I, as an executive coach, work with regularly. Many emerging leaders, even experienced ones want the quick fix, the silver bullet, and there is none. No one becomes the CEO of General Electric, Merck, or Wal-Mart by winning some sort of leadership lottery. It’s all about practice, experience, and consistency. So let me recommend Steve Martin’s book to every emerging leader who asks the question, “How do you get to Wall Street?” My answer: Practice, practice, practice.