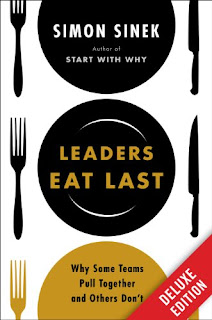 Overview: What makes Marines so great? Marine officers take care of their
troops always. For example, they “eat last”—after the troops. Soldiers act better than most of us because they are willing to sacrifice themselves in service of the safety of others. However, often in business, leaders eat first—get paid more and stand first in line for benefits. Real leaders put others first—protect others first. An excellent organization has a culture of empathy that protects and serves its people first, who in turn look out for the organization. When people feel unsafe and unprotected by leaders, they feel stress and anxiety. They seek safety and protection in silos and engage in internal politics that hurt the company. When we compete between those silos, we give off selfish chemicals; but when we collaborate, we give off selfless ones—allowing us to be our best selves.

--Employees First: CEO Bob Chapman (of Barry-Wehmiller) bought a number of manufacturing companies and was willing to listen to his employees. Factory workers noted how differently they were treated than office workers. Chapman decided to inject more empathy into the company—allowing everyone the same freedoms and discretion. Through a culture of caring, Chapman grew loyalty and nearly doubled revenues. Advice for leaders: “To earn trust, he [she] must extend trust.”  Our minds register threat or no threat, especially from leaders, and Chapman works to be no threat.

--From Me to We: Sinek offers this simple but powerful concept: The “circle of safety.” In short, strong cultures provide internal protection from external threats. Weak cultures do the opposite and create toxic work environments. Intimidation, isolation, and politics inside organizations with weak cultures can be a serious threat to success. Real leaders protect the tribe from both internal and external threats. Sinek references Steve Pressfield who wrote about how the Spartans (Greek warriors) protected each other: “A warrior carries helmet and breastplate for his own protection, but his shield for the safety of the whole line [comrades].” Without protection, factions (corporate gangs) and silos form for self-protection and ultimately hurt the entire organization. Gallup studies show that 40% of employees will quit if ignored by bosses, and 22% leave if actively criticized. Having little sense of control at work creates stress. And, about a third of workers want to leave their job.

--The Group:  When people feel safe at work, they band together to fight the outside competition. When they don’t feel safe, they expend much energy on self-protection. Size also matters: The optimal size of a company or a working location (office/plant) should be about 150 people. We’re all inclined to cooperate, especially if we know people we work with. In excess of 150, we lose that capacity to know people.

--Selfish Chemicals:  Self-focused chemicals like dopamine, adrenalin, and cortisol drive us to “hunt,” achieve, and compete to win. Dopamine gets released when we reach a goal, cross it off our to-do list—achieve something. Feeling a sense of progress and reward is created by dopamine. Unfortunately, emailing, texting, overwork, and gambling, alcohol and drugs can also cause the release of  dopamine—and thus become addictive, destructive habits. In an overly performance-driven environment, dopamine can become destructive to the circle of safety, creating stress, breaking down loyalty, and hurting the organization.  Cortisol prepares our bodies and muscles for fight or flight. This hormone protects the body under stress. It’s only intended to surge to protect in the moment. Lingering levels of cortisol—caused by difficult bosses, layoffs, and internal politics—break down the immune system, increase aggression, impair cognitive ability, and lower our capacity for empathy.

--Selfless Chemicals:  Such chemicals as serotonin and oxytocin are the social glue that holds the culture together—they are “the backbone of the circle of safety.”  Family, friends, and coworkers all get us through the good and bad times by causing us to produce serotonin, a mood enhancer given off from this support that makes us feel grateful towards those people. Generosity and physical contact (shaking hands, hugs) stimulate oxytocin. Oxytocin also boosts our immune system and makes us less addictive. In safe environments, oxytocin is given off and creates the feeling of love, friendship, belonging and trust. A good tribe should stimulate serotonin and oxytocin (making us feel safe), not dopamine, adrenalin and cortisol (making us feel threatened and competitive). Leaders who sacrifice for the group are revered as alphas and are allowed to lead by their followers.  Safety yields trust, and trust is the lubricant of good, responsive business.

--Examples of What Real Leaders Do: 1. Rather than laying off people, they have everyone, including all execs, take furlough days. 2. They protect (keep people safe), connect (socially bond the group), and direct (project a vision of the future). 3. They break the rules only to do the right thing, not for personal gain. 4. They provide cover from above. 5. They avoid “destructive abstraction” by putting a human face on statistics, not mindlessly employing draconian policies for the sake of numbers—selfless vs. selfish pursuits.  6. They sacrifice for the greater good of others.

Leaders Eat Last: Why Some Teams Pull Together and Others Don’t (Penguin, 2014) by Simon Sinek, reviewed by Steve Gladis, July 2016.