What's the Worst Thing That Ever Happened to You?
Posted by Steve Gladis at 9:57:00 AM No comments: 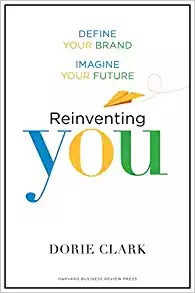 1.     Overview. Most of us know we’re ready for a change long before we do it. Whether you want a promotion where you are, intend to switch to a new company, find a whole new industry, or even start your own company—this book will help you. It’s part storybook and part manual of instruction. Simple to read, story studded, full of easy-to-digest directions in sections like “Try This” and “Remember,” the book is well worth recommending to anyone in search of a new path and rebranding.

2.     Perceive Yourself.  Find out how others perceive you. Some techniques like hiring a coach or asking someone from HR to conduct a 360 is a good start. Asking peers, subordinates, your boss, and even clients what your strengths and challenges are can help. Try a personal focus group: Gather 10-15 people for feedback. Too awkward to conduct it yourself? Have another person conduct it. If you sit in, you only listen—no comments. Also, check out your online profile. Every potential new employer will!
3.     Find Strategic Passions. You may know you need a change, but finding your destination takes time and effort. Start by investigating new careers online. Find people in those industries and read about their career path to the position. Google them and read “about” on their websites, their blogs, LinkedIn or Twitter posts. Next, the informational interview is the king of finding your new job and career. To get career informational interviews, go to LinkedIn to see who might get you an intro.  Some tips: Be clear about your ask; Don’t overstay your welcome; Ask about a typical day; Get more names to talk to; Thank-You notes matter; Follow up and stay in touch.
4.     Test Drive Your Future. Once you have a handle on your new path, it’s time to take a test drive. First, make a list of the companies you’d like to work for, find out if you’re connected on LinkedIn, decide on what you might have to offer.  Then consider volunteering, apprenticing, and job shadowing. Volunteering: One way is to find the employer that almost always says yes to free talent—nonprofits. Volunteers are the backbone of nonprofits, so if you want to become a speechwriter, volunteer to write speeches and written content for a nonprofit. Apprenticing: Sometimes to start a new career path, you have to take a step back and restart. Offering to apprentice can be the beginning of a restart. Shadowing: If you really want to know what people do on an average day, follow them around—shadowing. If you’re selective and respectful, you can get people to help you, and you’ll learn a ton. Just remember that the path to rebranding isn’t straight, so be prepared for twists and turns.
5.     Leverage Skills. While volunteering will help you explore new vistas, you can also expand your skills while staying at your current job by moonlighting and even by going back to school. First, at your current job, find out how you can expand or re-focus your work. This is called job-crafting and a perfect way to renegotiate your position with your employer, especially if you show how it will help her/him. Second, consider a side-hustle in the field you would like to break into. Some people start right where they are, and others start a home business. Third, be very selective about graduate school. In all but the top 10 MBA programs, carefully consider the brand value and perhaps consider a one-week executive education program at a name school that’s targeted toward what you want really want to do—and way cheaper!
6.     Use Mentors. We all need guides to help us climb the right corporate ladder. “When the student is ready, the teacher will appear,” is a famous Zen saying that’s true also about mentors. Once you feel the need, look around and there are many that have been there all along. And you’ll want to find one with relevant experience, to whom you’re willing to listen, who has your personal interest at heart, and genuinely wants to help. Start by making a list of 6 people you admire who might help. Decide on what kind of mentoring you want, how often you want to get it. Also offer your help—maybe you’re good at social media or have some technical talents they need. You may have more than one mentor for different aspects of your life.
7.     Match Skills to a New Future. Think about the skills you have now and how they can be used in a future position, and give yourself credit for important, but often overlooked, skills. For example, a stay-at-home mother who keeps the finances and the house afloat has critical organizational skills. Next, write down any professional skills you have—writing, speaking, leading. Provide concrete examples of each skill you mentioned. Think about any memorable skills you have—maybe you won a spelling bee in high school.
8.     Create Your Narrative. Once you’ve laid out your key talents, skills and uniqueness, it’s time to tell your story. Tell them about your journey, explaining the twists and turns along the way. The author suggests that you make connections between your past and present life. Find and connect the underlying themes of your life, and explain the value you will bring to this new position. Write down in a couple of sentences why you’re making the transition and rehearse saying it—first with friends, then people you meet, and finally with recruiters.
9.     Create Content. Build your portfolio. Use social media, blogs, and more to publish your philosophy and content for people to see. Create a video blog (vlog), a powerful way to frame your brand—think YouTube. Videos are 53 times more likely to hit the front page of a Google search! Podcasts are another way to extend your brand—what or who you want people to believe you represent. Schedule your social media (Hootsuite and Tweet-Deck).
10.  Launch Your New Brand. As you reintroduce yourself to the community, remember: You can take your current status with you. Professional athletes sell shaving cream based on that! Have someone scan your social media to see what image/message you’re sending. Think of all the unconscious nonverbal cues you send—diplomas on the wall, your formal or informal clothing—and make sure it matches the job. Have friends provide third-party validation. Branding/rebranding is a forever thing. 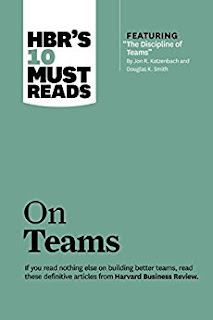 1. Overview. HBR’s 10 Must Reads on Teams. The Harvard BusiessReview has gathered some of its best articles on teams into one convenient book. Authors and scholars like Hackman, Pentland and Katzenbach, Eisenhardt, and Amabile fill this volume with rich content for leaders seeking research-based guidance. For example, using high-end sensors, Sandy Pentland and his MIT colleagues describe accurately how great teams behave based on massive data tracking. Theresa Amabile uses hundreds of daily work diaries to help us understand that people just want to make progress toward a meaningful goal every day—the “progress principle.” And Kathleen Eisenhardt and colleagues teach us how to engage in constructive conflict to produce excellent results while preserving relationships. Here is a summary of several of the best articles in this volume.
2. The New Science of Building Great Teams (by Alex “Sandy” Pentland). What separates average from great teams? MIT researchers equipped over 2,500 people with sensor badges (like those ID badges people wear at work). MIT’s special high-tech badges collected copious interactive communication data, such as voice tone, position of speakers relative to each other, time spent talking and listening to each other—but not recording conversation. From this communication data, highly reliable patterns emerged that allowed researchers to make reliable predictions about effective team behavior. “Those communication patterns were as significant as all other factors—intelligence, personality, talent—combined.” The three key communication factors that impact on performance are energy, engagement, and exploration. Thus, in the best teams, members of the team:
a. Talk about the same amount of time and in short bursts—no speeches!
b. Face each other and energetically gesture.
c. Connect with the team and each other individually.
d. Carry on back-channel discussions within the team.
e. Explore outside the team (conferences and meetings) and bring back new info to the team.
3. Why Teams Don’t Work (Richard Hackman interview). Teams often underperform due to issues with coordination, competition, and motivation. Even excellent leaders often don’t produce great teams. To increase the chance of a great team:
a. Appoint and protect a deviant. A devil’s advocate (deviant) helps to keep the team from agreeing too much—becoming too homogeneous—a real danger to innovation. The deviant says what others might be thinking, but no one has the willingness to say. S/he must be protected and allowed to tell the truth to power and the team.
b. Keep the number of team members low. Hackman suggests no double digits, even no more than six members. Become ruthless about whom you allow on the team. ONLY the necessary few should be allowed. Don’t let politics or lack of courage of the leader get in the way of key selections.
c. Set a compelling direction and purpose. People need to know the strategic direction—the why—of what they’re doing to have any chance at being aligned and successful. A compelling purpose with a single agenda needs to be the rule.
d. Focus on group process. Forget guiding and correcting individual behavior. Rather, use a coach-approach and group process. Leaders need to know how to launch and assess team progress and outcomes.
e. Stabilize teams. Data shows that stable teams win more often—whether flying planes, conducting surgery, or running companies. Regular turnover destabilizes teams.
f. Engage a team coach. Leaders who receive executive coaching are not as effective as the entire team getting coaching—especially at the beginning, midpoint and end of a team project.
4. The Power of Small Wins (Amabile and Kramer). When people make progress toward a meaningful goal every day, they stay engaged. These authors reviewed the daily work diaries of hundreds of knowledge workers and found that a positive inner work life made the difference between average and high-performing, engaged workers. And engaged employees and teams produce measurably more than others. The finding of this research is that when leaders help people make regular progress toward a goal, people feel empowered and motivated. The authors call this finding “the Progress Principle”—the single greatest motivator a leader can offer. In these diaries, best days were described with the word “progress” and on worst days, the word “setback” showed up.
5. How Management Teams Can Have a Good Fight (Eisenhardt, Kahwajy, Bourgeois) Leaders want differences to be debated without having personal attacks. Thus, separating personalities from issues is critical. Constructive conflict in a high-speed economy will be critical in the future. So how to do it? Vigorous debate on the issues but little time name-calling and politicking. These steps will help: Focus on facts. Develop alternatives. Agree upon goals, not solutions. Inject humor. Maintain a balance of power. Resolve issues without demanding consensus.
6. Virtuoso Teams (Fischer and Boynton). Successful virtuoso teams consist of top performers; intimate and intense relationships; strong communication systems, collaboration and conflict; assumptions that consumers are smart. The temptation is to settle for OK teams. The authors’ advice: DON’T. Ordinary teams produce ordinary results. With the right strategies, virtuoso teams produce high-end results. So, 1) Assemble stars. It’s an investment worth doing; 2) Build the group ego, not individual egos; 3) Make work a contact sport. Cause face to face contact/conflict that’s managed.;4) Respect the customer’s intelligence; 5. Herd the cats. Respect individualism and keep the team focus.
HBR’s 10 Must Reads on Teams by Harvard Business Press, 2013, reviewed by Steve Gladis, June 2018.
Posted by Steve Gladis at 7:04:00 AM No comments: